Potsdam, the regional capital of Brandenburg is certainly one of the most beautiful cities in Germany: the summer residence of Frederick the Great. Sanssouci Palace, the historical city centre with its Dutch quarter and Russian colony provide the flair of a European city. Particular highlights around our hotel in Potsdam: the Sanssouci palace gardens with several famous palaces, Bornstedt Crown Estate, the Potsdam biosphere, Filmpark Babelsberg and the broadest range of boat excursions. The lively hustle and bustle of the University city and the cultural attractions make a visit to Potsdam a real experience.

Leisure activities in the area of our Potsdam hotel:

Prussian pomp in Potsdam: City of palaces and parks

Potsdam, with its unique cultural assets is certainly one of the most beautiful cities in Germany: Schloss Sanssouci (Sanssouci Palace) is one of the highlights of Brandenburg's capital: The fairy tale palace of Frederick the Great conveys a attitude to life "without worries". In the spacious palace gardens, you stroll under old trees to historic sights such as the Chinesisches Haus (Chinese House) and the Neue Palais (New Palace). In addition, Potsdam is home to Charlottenhof Palace, the Orangerie, Cecilienhof Palace, Babelsberg Palace, Belvedere… The entire Potsdam cultural landscape was elevated to the status of UNESCO world cultural heritage site in 1990.

But Potsdam has a lot more to offer than impressive palaces: the beautiful old city, a vibrating cultural scene, the legendary film industry in the UFA Studios Babelsberg, three universities and last but not least the proximity to Berlin. What makes Potsdam so attractive is the mixture of historical buildings, the lively flair of the university city and the extensive parks which offer relaxing green oases everywhere. Although Potsdam is rather small and cosy, the city has the infrastructure and cultural offering of a big city.

And Potsdam is a city that you can discover wonderfully on a stroll. On a stroll through the Holländisches Viertel (Dutch quarter) with its red brick buildings, you can discover exclusive shops, cafés and restaurants. On to the Alter Markt (Old Market) with its Stadtschloss (City Palace), the Rathaus (city hall) and Nikolaikirche – flair like a Piazza in Rome. And those who are looking for recreation and nature takes themselves off to the Lustgarten (Pleasance), just a stone's throw from the market. Fairs, city festivals and arts and crafts markets take place regularly in the beautiful park.

A real highlight for visitors to Potsdam are the boat tours around the city: The Potsdam palace tour, the seven lake tour and a romantic evening trip are particularly popular. A trip to Potsdam is the perfect destination, especially for families: The capital of Brandenburg and the beautiful surrounding area with its clear lakes for swimming and boat trips, the Biosphäre Potsdam (natural adventure world) and a tour behind the scenes of favourite films at Filmpark Babelsberg are attractions for young and old.

The Brandenburg capital has a high-quality cultural offering in addition to the historical attractions. The international open air art exhibition Kunstallee Potsdam, the legendary Hans-Otto-Theater or concerts in the Nikolaikirche ensure unforgettable experiences.

In the midst of Potsdam city centre, the programme of the Nikolaisaal Potsdam provides exciting concerts and event experiences. The modern concert house combines classical music, jazz, pop and film music under one roof. In the Filmmuseum Potsdam next door the permanent exhibition "Babelsberg - Faces of a film city" lets you get up close to Marlene Dietrich and Kate Winslet. And in the Haus der Brandenburgischen Geschichte (House of Brandenburg History) in the former royal coach house at Neuer Markt (New Market), you can learn a wealth of information about the Kings of Prussia and their history.

Potsdam's newest and most popular cultural location is the Schiffbauergasse. Potsdam's cultural scene meets here on the idyllic banks of Lake Templin and against the amazing backdrop of the Prussian palaces and gardens. Those interested in art and culture experience a lively mixture of art and night life right by the water: Concerts, theatre, performances, films and exhibitions enrich Potsdam's night life here. The most well-known venues are Waschhaus Potsdam and T-Werk.

Potsdam is a real Eldorado for festival fans. Numerous events and festivals take place against this unique historic backdrop all year round: e.g. the Musikfestspiele Potsdam Sanssouci (Potsdam Sanssouci Music Festival), Potsdamer Schlössernacht (Night of the Potsdam Palaces) and Theaterfestival UNIDRAM. And also the area around Potsdam offers a wealth of culture: the romantic Pfaueninsel (Peacock Island), Caputh, where Albert Einstein lived and Sacrower Heilandskirche are absolute highlights of the region around Potsdam.

Walking through Potsdam has the impression of hiking through Europe: The famous rococo palace Sanssouci is reminiscent of its predecessor in Versailles, the Neue Palais (New Palace) at the other end of the Sanssouci Park is considered the last major palace complex of the Prussian baroque. And the Orangerie in the style of the Italian renaissance was based on the Uffizi in Florence.

If you walk through Potsdam city centre you will quickly notice: Potsdam is a European city through and through. The beautiful flair of the Holländisches Viertel (Dutch quarter) with its brick houses and charming shops and restaurants, the Russian colony Alexandrowa and the weavers' district Nowawes are attractive sights. On the Alter Markt (Old Market square) you feel like you are on a Roman Piazza and at Neuer Markt the Haus der Brandenburg-Preußischen Geschichte (House of Brandenburg Prussian History) lets you get close to the Prussian kings.

The beautiful Havelland in Potssdam's green surroundings also offers more than pear trees: The nature reserve around Potsdam provides picturesque landscapes, water sport opportunities and impressive hiking routes. The far-reaching forest and lake landscape has wonderful bathing beaches and lots of greenery, Strandbad Babelsberg with its beach, is embedded in one of the most beautiful park complexes in Potsdam and in Waldbad Templin woodland baths you can relax surrounded by unspoiled nature. If you would like to combine culture with nature and lust for life, take the ferry to Potsdam's cultural landscape such as Pfaueninsel (Peacock Island), Caputh with its Einsteinhaus and the Baumblütenfest (Tree Blossom Festival) in Werder.

The Wyndham Garden Potsdam Hotel is located right next to the park Sanssouci. The large park is perfect for a jogging tour or a leisure walk. On the eastern end of the park you will see the Palace Sanssouci. In the former summer residence of Friedrich the Great you can visit magnificent rooms.

In only a few minutes walking distance from our hotel in Potsdam you will reach the New Palace. During a tour through the building you will not only admire the architecture but also several art works of the 18th century.

For a short trip into nature Peacock Island is the perfect place to go. The small island on the river Havel is close to Wannsee Lake. The ferry takes you from the lake side promenade straight to the small white palace. Additionally there are beautiful plants in the roses garden and in the palm house on the island.

The movie park Babelsberg is a great destination for your family trip in Potsdam. Experience shows and movie sets of popular movies such as “The Three Musketeers” or the German daily soap GZSZ. Feel like in the wild west on the Western Street of the movie park.

Various boat cruises are offered in the area around Potsdam. One of the most beautiful is the 7-Lake-Cruise. It will take you from the small Wannsee Lake to Pohle Lake, Griebnitz Lake, Glienicker Lake, Junfernsee Lake and on the river Havel back to Wannsee. 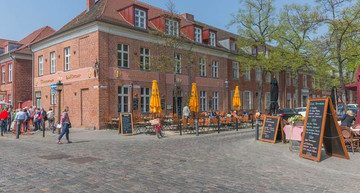 One of the most popular districts of Potsdam is the Dutch Quarter. Besides the characteristic red buildings there are also various cafés, restaurants and art shops. During your stay at the Wyndham Garden Potsdam Hotel this is the ideal place for a pleasant evening in Potsdam.

The area around the Nikolai Church is known as Old Market and is the heart of the city Potsdam. This square was constructed in Roman style in the 18th century. Especially the city hall is worth a visit during your stay in Potsdam. 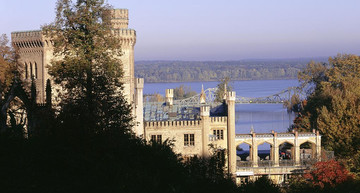 The neo-gothic Palace Babelsberg was summer residence of emperor Wilhelm I. It is situated in park Babelsberg right at the river Havel. Here you will find nice path on the riverside with great view on the city of Potsdam and beautiful flower gardens. Also you can enjoy a panoramic view from the tower Flatow. 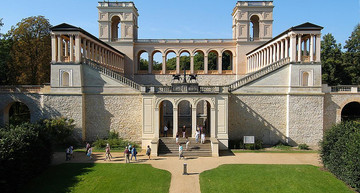 One of the most stunning views on the city of Potsdam and its surroundings you will get from the Palace Belvedere on the hill Pfingstberg. On nice days you can even look up to Berlin. Inside the palace you can also explore the regular exhibitions.